All Of Your Refrigerant Needs Under One Roof 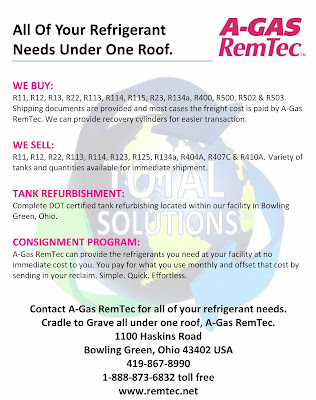 CONSIGNMENT PROGRAM:
A-Gas RemTec can provide the refrigerants you need at your facility at no immediate cost to you. You pay for what you use monthly and offset that cost by sending in your reclaim. Simple. Quick. Effortless.

Posted by A-Gas Americas at 8:12 AM No comments:

We recently achieved the significant milestone of issuing over 40 million carbon credits, each representing one metric ton of carbon dioxide equivalent greenhouse gas emissions reduced or sequestered from the atmosphere. Learn more about the top 10 largest offset projects in the Reserve that helped this achievement:

We recently achieved the significant milestone of issuing over 40 million carbon credits, each representing one metric ton of carbon dioxide equivalent greenhouse gas emissions reduced or sequestered from the atmosphere. Learn more about the top 10 largest offset projects in the Reserve that helped this achievement:

CCAC Commits to Scaling Up Action on Short-Lived Climate Pollutants

The meeting of the Assembly, which took place on 3 September 2013, in Oslo, Norway, was co-hosted by Norway's Minister of Environment and the Minister of International Development. At the meeting, Norway committed to contributing an additional 110 million Norwegian kroner (approximately US$20 million) to reduce emissions of SLCPs in developing countries.

Posted by A-Gas Americas at 6:01 AM No comments:

End of the Season Reduction Sale

End Of The Season Reduction Sale

Depending on your needs, our Refrigerant Program features
·        Pickup of recovered refrigerants within 24 hours
·        Acceptance of follow-purity R-22 to 90%
·        Free disposal of mixed and unusable refrigerants
·        All freight arrangements paid by A-GAS RemTec
·        Documentation is provided for your EPA record keeping
·        Recovery tank refurbishment & certification to DOT standards
·        Refrigerant banking and storage service


www.remtec.net
Posted by A-Gas Americas at 7:52 AM No comments: 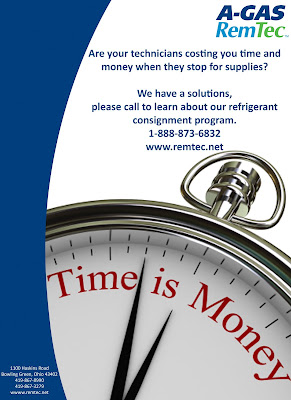 A-Gas RemTec’s Refrigerant Consignment Program has been developed to save you time and money.  We will put refrigerants at your site and you use when needed. This eliminates the time and cost of running to the wholesale house to pick up what you need.

The product will be sent to your location at no cost to you and A-Gas RemTec will bill you for only what you have used for that month. There are no service fees or hidden charges. We supply you with what you need for when you need it.

Copyright 2013 The Sacramento Bee. All rights reserved. This material may not be published, broadcast, rewritten or redistributed.


It will be a lifeline of sorts for the cement factories, oil refiners and hundreds of other businesses struggling with California's stringent greenhouse-gas restrictions.

Soon they'll be able to comply – in part – by paying other people to reduce their own carbon emissions.
That's right: Under standards being drawn up by the California Air Resources Board, companies that have to meet the state's greenhouse-gas standards will be able to satisfy part of their burden by purchasing "offsets" – credits that are generated when carbon emissions are slashed by others.

Such as a dairy farmer in Michigan. Or a company in Arkansas that destroys gaseous coolants from old refrigerators. Or a tree planter on California's own North Coast.

The use of offsets will inject a somewhat controversial element into California's effort to battle global warming.

Two environmental groups sued the state last year to prevent the use of offsets, although the case was dismissed in January. Their argument: Offsets undermine the basic goal of curbing greenhouse gases by letting companies buy credits for emission reductions that almost certainly would have happened anyway.
"What we actually need is straightforward, meaningful reductions in emissions," said Mark Reynolds of Citizens Climate Lobby, one of the groups that sued.

But state officials and some environmentalists say offsets are a perfectly legitimate way to combat global warming.

They say offsets give California companies greater leeway in how they follow the state's climate-change law, AB 32, which was signed into law in 2006. With companies spending an estimated $1 billion a year to comply, this flexibility will help them save money.

"Offsets are a low-cost mechanism," said Rajinder Sahota, manager of the ARB's climate change program evaluation branch. The ARB oversees the state's year-old carbon emissions standards and will police the use of offsets.

Still, some critics say companies in California shouldn't be allowed to satisfy part of their regulatory burden by paying someone in another state to curb their carbon emissions.

"The local communities living on the fence lines of the refineries and power plants and incinerators don't receive the benefits," said Jeff Conant of Friends of the Earth, another critic of offsets.

But because climate change is truly a global issue, advocates say it isn't important whether some of the emission reductions occur in another state.

"California is still cutting climate change pollution, which is what the law is about," said Derek Walker, an associate vice president with the Environmental Defense Fund.

Offsets aren't new; they've long been a part of the European Union's mandatory carbon program. In the United States, many businesses and individuals already use them voluntarily, often to show their concern for the environment.

Most famously, former Gov. Arnold Schwarzenegger has bought credits from the Pacific Forest Trust, manager of the Fred M. van Eck Forest near Arcata, to offset the carbon emissions from his private jet travel. The money was used to help keep the forest healthy so its redwoods could soak up more carbon.
But for many companies facing California's carbon rules, offsets will likely become a necessity, not a luxury item.

AB 32 sets an annual cap on greenhouse-gas emissions, and reduces it each year. The goal is to reduce California's emissions to 1990 volumes by 2020, a drop of about 30 percent from current levels.

More than 400 manufacturers, food processors and other big industrial firms are subject to the rules. They currently have two ways to get their emissions under the cap: Shrink their carbon footprint somehow, or buy state-issued emission permits.

Offsets will provide a third avenue for compliance. Companies will be allowed to use offsets to satisfy up to 8 percent of their obligation under the law.

To this point, the ARB hasn't approved any offset projects. But the agency is evaluating more than 60 different projects, all of which are designed to dispose of methane, carbon and other forms of greenhouse gases. Decisions are expected by the end of summer, said ARB spokesman David Clegern.
"Everybody's waiting for this," said Jon Costantino, head of a Sacramento-based group called the Association of Carbon Market Participants. "Once there are approvals, there will certainly be activity – they will be bought and sold."

The projects awaiting the ARB's approval, located all over the country, are already in operation.
A privately run Arkansas incinerator has already destroyed nearly 3 million tons of greenhouse gases found in refrigerator coolants. Dairy farms as far away as Virginia and upstate New York have installed "digesters" that consume methane from livestock, while forest managers in California and Maine are offering offsets tied to increased tree planting and other measures.

State officials say industries will be allowed to use offsets from carbon reductions that have already taken place. "Let's reward everyone that took that early action," said the ARB's Sahota.

Project developers say their offsets aren't vague promises. Rather, they represent concrete measures, with results validated by outside auditors, that are making a difference in the fight against climate change.
"These gases have been destroyed, verified by independent third parties," said Patrick Pfeiffer of Eos Climate Inc., a San Francisco company that partners with companies to destroy greenhouse gases that leak out of abandoned refrigerators.

In anticipation of ARB's approval, companies and brokers are already buying and selling some offsets in limited volumes. On average, offsets sell for about $10 per ton of carbon reduced. That's about $3 less than the state-issued emissions permits.

Why the difference? Partly because there's a chance the ARB will reject an offset.
The state agency says it is training dozens of independent contractors to periodically inspect offset project sites and make sure the carbon reductions are legitimate.

As a result, companies could buy offsets only to find out they're worthless.
"There is a risk they're going to be invalidated," Costantino said. "There's just more risk with an offset."

A-Gas Americas
1100 Haskins Road Bowling Green, Ohio, United States
Established in 1986, A-Gas Americas (Formerly RemTec International) offers products and services that reduce ozone depletion and global warming. Our primary mission is to buy used CFCs, HCFCs, HFCs and Halons and reclaim them to industry standards. All CFCs, HCFCs, HFCs and Halons are banked and then offered for sale to our customers with full laboratory certifications. Refrigerants such as R-11, R-12, R-22, R-134a and the 400 and 500 series blends and Halon 1211, Halon 1301 and Halon 2402 are high in ozone depleting potential (ODP), or are high in global warming potential (GWP). All of these halocarbons pose a threat to our environment, and are a major global concern. A-Gas Americas maintains our commitment to environ-mental protection through innovative reclamation of these chemicals.